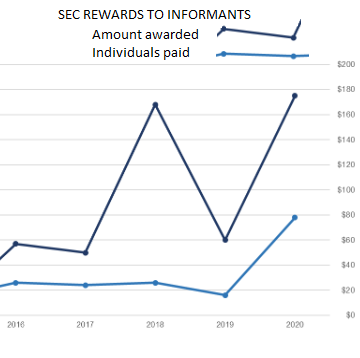 In the United States the number - although not the monetary amounts - of awards that went this year to people who reported wrongdoing at financial firms has exceeded previous years by a vast margin. Indeed, this year's number is 37% of the total since 2011, when the Securities and Exchange Commission first started paying for tip-offs.

Fiscal year 2020 was a record year for the SEC's so-called Whistleblower Programme. As of the end of Fiscal Year 2020, the SEC had awarded 106 individuals approximately $562 million. Last year the regulator began to streamline the way it evaluated claims for awards to telltales, having received much abuse in the press for dragging its feet and begrudging them their due. It has now bumped up the rate at which it evaluates claims and issues awards. As a result, it issued approximately $175 million in total awards to 39 people - double the number of people to receive awards in a single year over the next-highest year. Fiscal Year 2020 also saw a record number of "preliminary determinations," in which the SEC decided whether to approve or deny claims and, if it approved them, how much to award. In the brief time since the Fiscal Year ended, the Whistleblower Programme has continued to push the boundaries of awards - the SEC issued the largest award in its history (approximately $114 million to a single person) on 22 October.

The figures have emerged in the SEC's annual enforcement report, published this month. Commentators have theorised that time spent in 'lockdown' has in some way emboldened people who have seen malpractice to come forward. When a remote financial worker is toiling away in the privacy of his own home, some believe that his superiors might have fewer opportunities to keep their eyes on him and discover that he is the one who has "ratted them out." The fact that his colleagues are miles away from him might also reduce his worry about retaliation, purely from the fact that geography is a moral force. If a would-be telltale has already been furloughed or laid off, he might be even less reluctant to sound the horn.

The upper figure on the chart is $200,000 and the dark blue line shows the figures that pertain to it after 2016. The light blue line - representing the number of informants that the SEC paid - does not relate to any figures enumerated on the y axis, but the figure of 40 lies at the same place as the $80 mark.

FCA gauges financial resilience in the era of the Coronavirus